The Frog Prince is one of the oldest "folk tales" in our culture. Some say it is one of the first of the Brother Grimm's collection, published in 1812. However, it possibly originated in Roman times or even earlier

The original point of the story is hard to nail down. There are plenty of moral points, however, that make it a popular fairy-tale in modern times.

The plot in a nutshell

A spoiled brat of a princess drops a ball in the forest, and it lands in a big pond. A grotesque frog retrieves the ball for her, but only in return for an act of kindness. This act of kindness might have been kissing the frog, allowing it to stay at the palace, or something else, depending on version of the story. Let's just say it's an act of kindness. The result is that the frog turns back into the handsome prince - his true self - and the two live happily ever after.

[I know that many people like frogs. I personally wouldn’t want to kiss or cuddle one, but I do admit they can be cute, and their legs really do taste like chicken. When I nearly trip over the many cane toads in our back yard, however, I do NOT see Kermit there, but something despicable.]

In Luke's gospel (Luke 19:11-27), Jesus tells a story. It is about a nobleman (or prince) who goes away from his city to officially become king. He leaves his servants in charge of his enormous property and wealth. Now, his citizens despise him, and don't want him as king. In fact, even one of his trusted servants hates and fears him.

When he returns as king, he deals with the wicked citizens and also with the unfaithful servant. On the other hand, he greatly rewards the servants who are faithful.

Jesus was, of course, talking about himself. He was going away from the Earth to receive his kingdom. On his return, he would deal with the bad guys and reward the good guys - that is, the ones who are faithful. In other parts of the Bible, the faithful servants of Jesus are compared with a bride, and Jesus is the bridegroom. In other words, the faithful are not just rewarded, but get to marry into the kingdom, and become fellow-heirs with the King to live happily ever after!!

This is why we celebrate Easter. The tragic death of Jesus on the cross is not the end of the story. In fact, it is far from it.

This despised "frog" hid his true princely self, and his resurrection and ascension back to his hometown of Heaven was to receive his kingdom. Those who are faithful and return the act of kindness (by honouring the prince) are rewarded by getting to become fellow heirs with the King himself!

Jesus might not have inspired the story of the frog-prince, but there is a certain similarity. Most of the world despise Jesus as a yucky frog, for whatever reason. But he isn't. He was the Prince of Peace, who is now our King, and Christians, those once spoilt brat princesses who accept the invitation, become fellow heirs to God's Kingdom.

And they all live happily ever after...

Greg has taught and tutored secondary Maths, Science and ICT for over thirty years, and has been a school principal before dedicating his life to working with home-educating families. He was actively involved with the homeschooling of his four children. 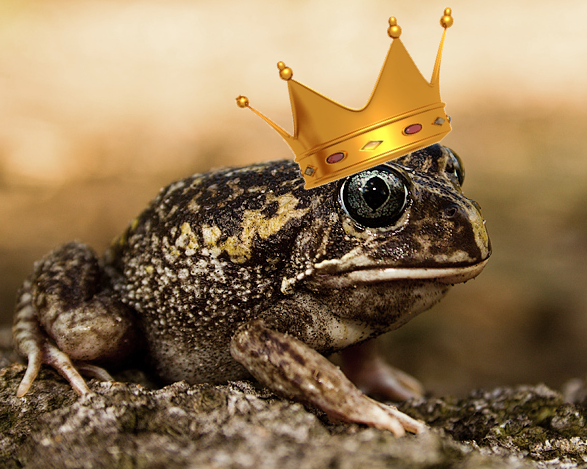